The Additive Manufacturing Revolution: Ready or Not

My professional life began in earnest in the 1980s at the very same time that the Just-in-Time (JIT) revolution emanating out of Japan was really beginning to hit its stride. Borne out of the vaunted Toyota Production System, JIT rocked manufacturing industries large and small and gave rise to new modes of competition that remain as potent today as they were 30 years ago.

A cornerstone of JIT was ‘batch of one’ production, an innovation that resulted in low inventories, faster factory throughput, and for obvious reasons, stronger business results. Alliteratively speaking, JIT was a hit.

I offer this by way of explaining why I think we may be on the cusp of another major paradigm shift in the world of production, this time through a process known as Additive Manufacturing (AM).

Over the previous 5 years or so I watched as ‘the maker revolution’ sprang to life in garages and sheds and workshops around the world. I saw, too, how phenomena like ‘rapid prototyping’ were radically changing the design process.

It was clear that something significant was brewing.

Those initial forays into AM brought with them legitimate questions and concerns. The output of those early systems was poor, leaving observers like me to wonder if they’d ever produce anything more than crude prototypes. And even as the resolution and quality of the output improved, the unit costs remained high.

But revolutions are sneaky affairs, and by the time I visited London’s Design Museum in 2015, it had become clear that a significant number of their candidates for design awards were using AM. This was particularly true of products that could not be produced, as a single piece, through any other production process. 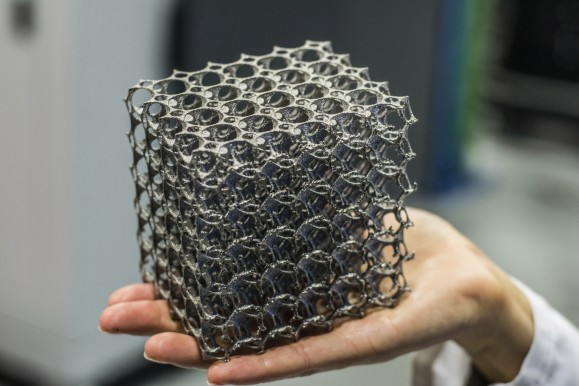 In my mind, that left just one question: could production grade materials for industrial applications ever be produced?

By mid-2017, that question clearly has been answered. Consider, for example, that the FAA recently approved the first AM-generated structural components for airframes. And on the terra firma side of things, Adidas announced that the midsole of its new Futurecraft 4D sports shoe would be produced by AM.

Both of these announcements are significant, albeit for different reasons. Approval of parts for Boeing’s 787 Dreamliner, for example, proves that AM has undergone – and passed – rigorous testing of its materials, design, and production processes. Similarly, the Adidas announcement demonstrates a commitment to AM as a volume production process, with Adidas expecting to manufacture at least 100,000 pairs of the Futurecraft 4D shoes by the end of 2018.

I recently had the pleasure of seeing the new Adidas midsole during a visit to its Silicon Valley partner, Carbon 3D. What became immediately clear is that the midsole cannot be produced by any other means. AM has forever shifted the design paradigm.

What AM Means to the Middle Market

The temptation, of course, is to dismiss AM as a pricey solution exclusive to larger, deep-pocketed players; that AM can’t possibly deliver comparable unit costs for mid-market products.

Before you dismiss AM as a viable design and manufacturing option, however, I would submit there are a few issues to consider.

First, remember that unit costs likely will drop as more and more materials – whether metals or polymers – are developed and approved for AM. Indeed, their prices could drop quickly.

It’s also important to recognize that a company could realize substantial reductions in the number of production steps, since complex shapes can be produced from a single workstation. And while there are still some challenges with cycle times, the capacity of AM machines is rising fast.

All of which means unit costs with AM may not be as far removed from your current costs as you think.

Before moving on to the other elements of cost, I want to make an observation about the aforementioned design paradigm I referred to in the Adidas Futurecraft 4D. It strikes me that the ability to re-think designs is one of the keys to truly breaking through with new products.

Consider a product that has complex flow paths for a liquid – a valve for instance. The current design paradigm would reflect the ways in which complex flow paths can be created by current available production methods. In my experience that would basically mean a number of drilling operations and then ‘blanking’ some of the holes created in order to form the desired flow paths inside the valve.

But what if the constraint of the current production method was taken away? How would the engineer approach the problem if she could design the optimum flow path, knowing that the production process could deliver it, however complex, in a single operation?

Unit costs are important in considering any new production process of course. However, AM, just like the application of JIT more than a generation ago, offers some additional and significant benefits when you look at the total costs of production, including:

The bottom line: despite the normal bumps in the road associated with a truly transformational technology like Additive Manufacturing, it’s clear that AM has reached the point of mainstream acceptance across multiple industries.

Our advice is that an investment of time and intellectual capacity in considering the current state of the art of AM, how it may be utilized to gain competitive advantage for your products and the implications for your organization, is an investment that any leadership team in an industrial company should be making this year.