In the very earliest days of a newly acquired portfolio company, “I’m from corporate and I’m here to help” is probably one of the worst things that a leadership team can hear, particularly coming from operating partners. While that “help” can be of immense value, the initial reaction is usually one of defensiveness.

The role of Operating Partner within the PE world is very much a live issue, but if you have chosen to pursue that route it’s worth considering how to maximise the effectiveness of the role and, frankly, give your Operating Partners a fighting chance of adding value.

It’s a truism to say that the relationship between a portfolio CEO and the Operating Partner needs to be built on trust but it’s worth exploring how to get there. This powerful graphic is useful in explaining how we see this issue. 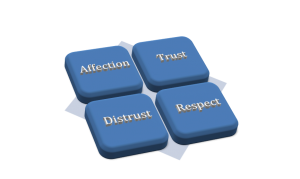 I learned early on in my career the problems of the “busy fool syndrome.” In my first role, we worked on solving organisation problems, usually as solo analysts and with multiple projects at any point in time. We became professional plate spinners. This makes for a great spectacle but of itself does not add value.

In contrast, in my second career role, we looked at redesigning failing areas of the organisation using dedicated multidisciplinary teams. We designed out issues that would have been considered problems to solve in my first role. This resulted in quicker and deeper change.

The truth runs counter-intuitive for most organisations – the more we attempt to do, the less we deliver. We spread ourselves thinly rather than deeply.

The failure of organisations to decide on the MAIN THING and to keep it the MAIN THING, costs them dear. Attempting too many improvement projects leads to lost time and delayed improvement.

How do organisations progress the MAIN THING?

Firstly, make the tough decision and decide what is the MAIN THING for your organisation. If the organisation has operational problems delivering the […]