Building a Board that Works for Middle Market PE Firms

High asset prices have placed enormous pressures on middle market private equity management teams to execute ‘the plan.’ While we previously focused on how an Operating Partner can help prevent the epidemic in CEO turnover plaguing many such operations, in this post we want to talk about an equally important component of the equation: identifying and building an effective Board of Directors.

It goes without saying that the BoD is critical in ensuring investor returns. And while the nature of the BoD roles and where they should invest their time and energies are somewhat dependent on the circumstances of the deal and the nature of the value creation plan, there are four areas the BoD upon must focus on irrespective of the deal nature:

Each of these areas requires some time and attention to assure the prosperity of the firm.

However, at its most extreme (or worst), the BoD expends a disproportionate amount of effort on plan execution and governance. And while plan execution is clearly an important role, the focus on this issue to the exclusion of everything else can lead to a BoD that finds itself looking in the rear-view mirror.

Spreading the Wealth: The 4 Areas that Need BoD Attention

As a previous CEO of a privately owned business, it is frustrating to attend Board meetings where discussions on plan execution consume the majority of the meeting.

So let’s take a look at each of the tasks outlined and why we think they deserve BoD attention.

While this is situation dependant, there is a way of looking at the composition and role of the BoD of smaller privately owned businesses, using a different lens that may lead to better outcomes. 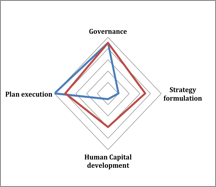 The profile in red (shown opposite) is obviously a simple abstract view of how the balance may need to change.

The idea is that the decision about the focus of the Board in these four dimensions is a proactive decision that forms an element of the investor ‘playbook.’

We think that this model poses two significant questions

Expanding Role of the Board

There is a continuing trend on the Boards of public companies for Directors to spend increasing amounts of time on their board duties, especially in the area of strategy. It would seem to be clear that having an informed opinion about both strategy formulation and human capital development requires that Board Directors are much better informed about the company, its markets, its customers and its operations, all of which demand an increased investment of time between BoD meetings.

We think that the role of Chairman is a critical choice in delivering this playbook. The Chairman needs to be capable of driving a dynamic and forward-looking agenda, as well as orchestrating the relationships between the BoD and CEO in a way that legitimizes ‘tough’ discussions in a non-confrontational and open environment.

We have previously commented on the role of an effective Operating Partner and their relationship with the CEO; a role that demands both an intimate understanding of the business and a relationship based on trust with the CEO.

We think that the Operating Partner is an important component of this enhanced Board of Directors, but the other members need to be chosen for specific skills and perspectives and then built into a coherent whole. Decisions about Board membership based solely on participation in creating the deal may not cut it any more.